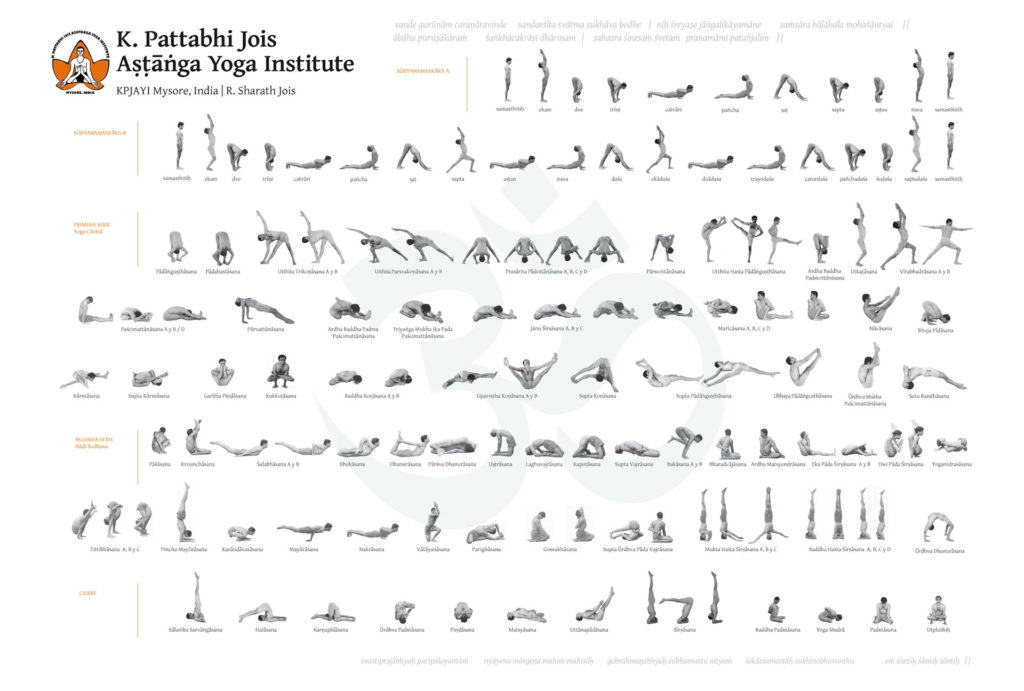 Ashtanga (vinyasa) yoga is a traditional yoga method, established by Sri K. Pattabhi Jois (also known as Guruji) in the 20th century. Jois established the Ashtanga Yoga Research Institute (KPJAYI) in 1948 in order to offer his teachings to his closest students. After his death in 2009 and after seven decades of teaching, he passed on the lineage of Ashtanga yoga to his daughter Saraswathi and his grandson Sarath Jois.

Ashtanga yoga as an eight-fold path of yoga

“Ashtau” means “eight” in Sanskrit and Ashtanga yoga could translate into a “eight-fold path of yoga” as outlined in Patanjali’s Yoga Sutras. According to Patanjali, “yoga is the stilling of the fluctuations of the mind” and there are eight limbs of yoga that lead to a complete self-realization, all of them being just as important:

The last three limbs are grouped under the term Samyama, integrating the body, mind, breath, intellect and Self.

The system behind the Ashtanga yoga practice

Ashtanga yoga method is based on synchronizing the (Ujjayi) breath with a progressive series of postures. The intense breath produces internal heat and a purifying sweat that detoxifies the whole body. In Ashtanga Yoga, asanas are grouped into six progressive series, each of them containing the exact sequence of postures. It is important that we follow the sequence consistently, since each asana has a specific purpose and thus serves as a preparation for the following asana. The practice of Ashtanga yoga is therefore based on the repetition of the same asanas over and over again. When we first start practicing Ashtanga yoga, we usually start with half Primary series, slowly adding the postures with the help of our teacher until we complete first series. Only then are we prepared to move on to the next series.

Primary Series, also known as Yoga Chikitsa or Yoga Therapy, purifies the body and stimulates the functioning of the organs. It strengthens our body and establishes strong foundations for our further practice.

Second Series or Nadi Shodhana strongly stimulates the nervous system and the flow of the vital energy (prana) in our body, which can also have a strong impact on our (current) emotional state.

Primary and Second Series are followed by Advanced Series, also called Sthira Bhaga, which are divided into A, B, C and D, sometimes also numbered from 3 to 6. Through these series, we develop a very strong physical and mental strength and stability. These are extremely demanding asanas, conquered only by the most devoted practitioners.

All asanas and Series are taught gradually with the help of an experienced teacher. Ashtanga Yoga is traditionally practiced six days per week, Saturdays or Sundays being the rest days. We also rest on Moon Days (full moon and new moon). The traditional way of practicing Ashtanga yoga is Mysore style where each practitioner does the practice at their own pace, following their own breath.

Although Ashtanga yoga might seem like a very monotonous practice at first glance, the daily implementation of the same asanas strengthens the body and our awareness of it. The repetition of the same movements also allows us to shift our focus from physical asanas to other aspects of Ashtanga Yoga. Slowly, with a certain amount of dedication, discipline, determination and devotion, our practice will transform into a moving meditation.

A very specific element of Ashtanga yoga is a so called vinyasa that connects the breath with the physical posture. We practice vinyasa in between each posture and even each side of the posture. In modern language, this type of vinyasa is also known as Jumping through and Jumping back.

The breath (pranayama) and the postures (asanas) are ultimately followed by dristhi (focal point). The combination of these three elements in the practice is called tristhana: a complete focus of the mind.

Another typical element of Ashtanga yoga are energetical locks or bandhas which help us generate heat and energy in the center of our body (the abdominal part) and lift it to the upper chakras. There are two bandhas that should stay activated throughout our entire practice: Mula Bandha and Uddiyana Bandha. Mula Bandha (Mula means “root” and bandha means “lock”) is located at the tip of the spine and we activate it by gently squeezing our perineum. The second lock, Uddiyana Bandha (Uddiyana means “upward”), is located in the abdominal part of our body. It is activated by engaging or sucking up the lower abdomen.

Ashtanga yoga is therefore a combination of all of the above mentioned elements.

Getting authorization and certification to teach Ashtanga Yoga

Ashtanga Yoga is the only yoga method that doesn’t support modern Teacher Trainings. Only the most dedicated practitioners that return to Mysore year by year to practice with their teacher at KPJAYI might or might not get the blessing from their Guru (previously Pattabhi Jois, now Sarath Jois) to pass on the lineage of this traditional method. Sarathji would decide when and to whom he would give the authorization (and ultimately the certification) to teach Ashtanga Yoga, no matter how long you have been practicing.

There are numerous Authorized (level I or level II) Ashtanga Yoga teachers in the world, but only a selected few (under 40) that received the ultimate blessing from their Guru – the certification to teach even the most advanced asanas (from 3rd Series on).

Ashtanga yoga isn’t for everyone: true or false? 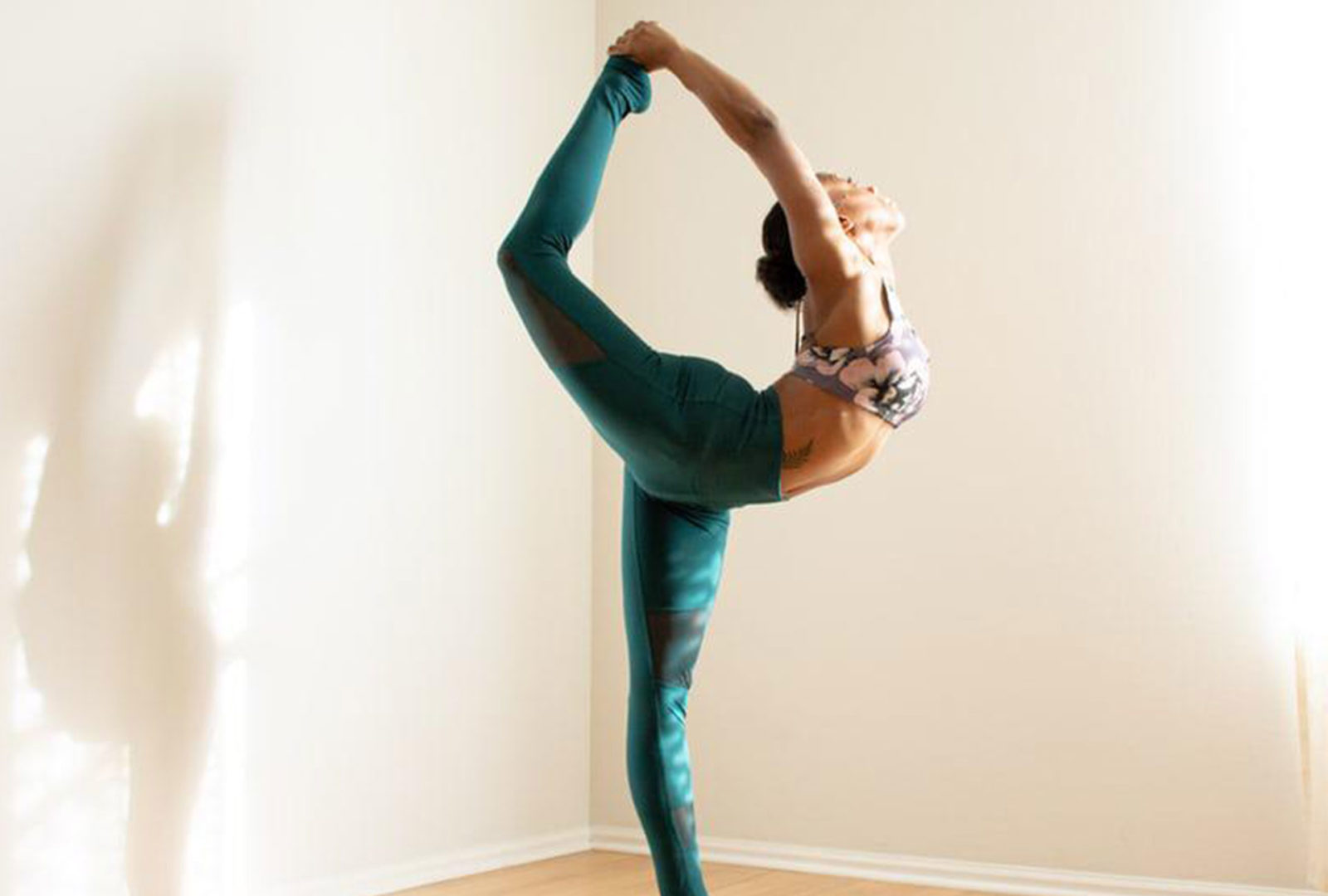 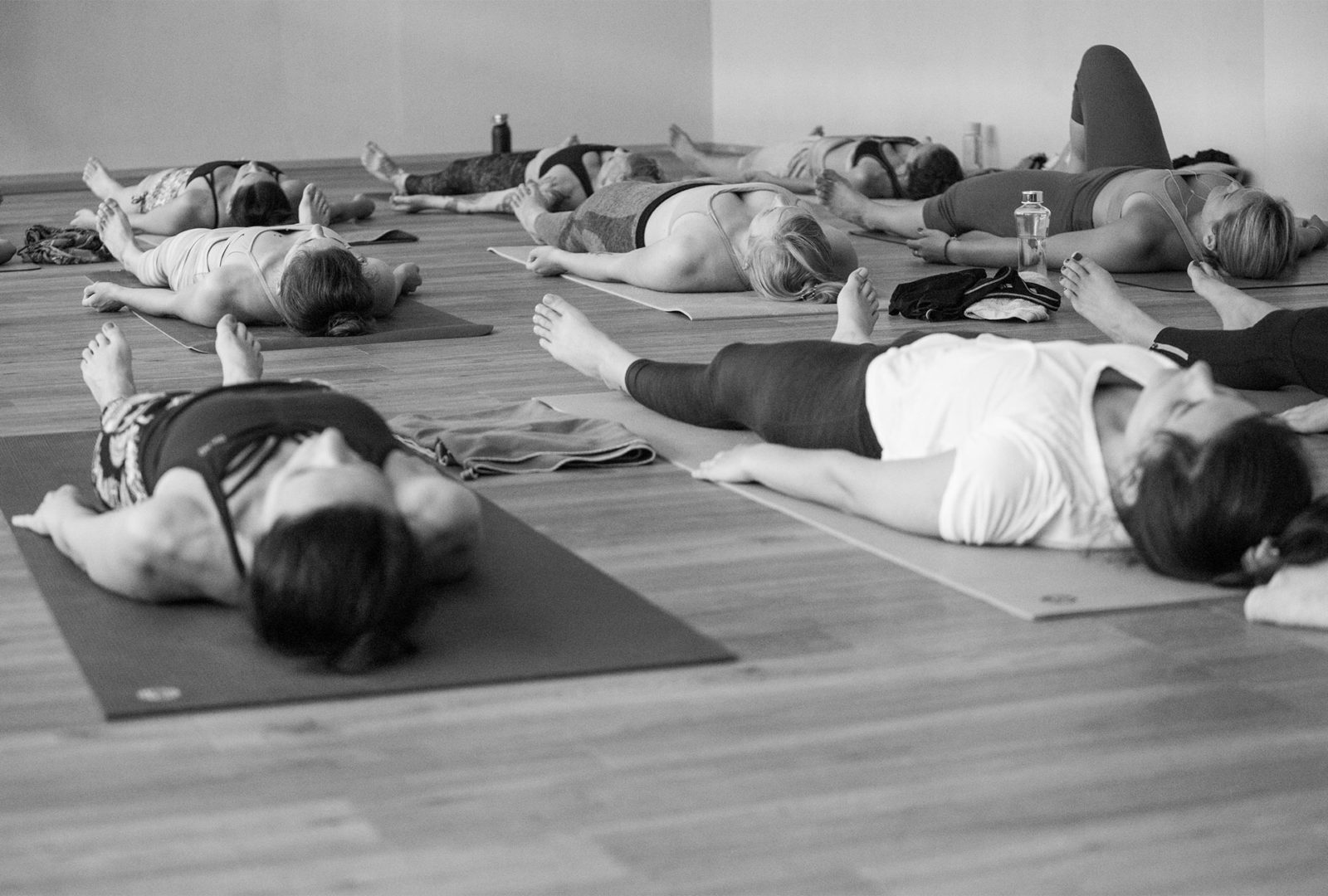 Top 3 songs for Savasana and the mystery of this posture 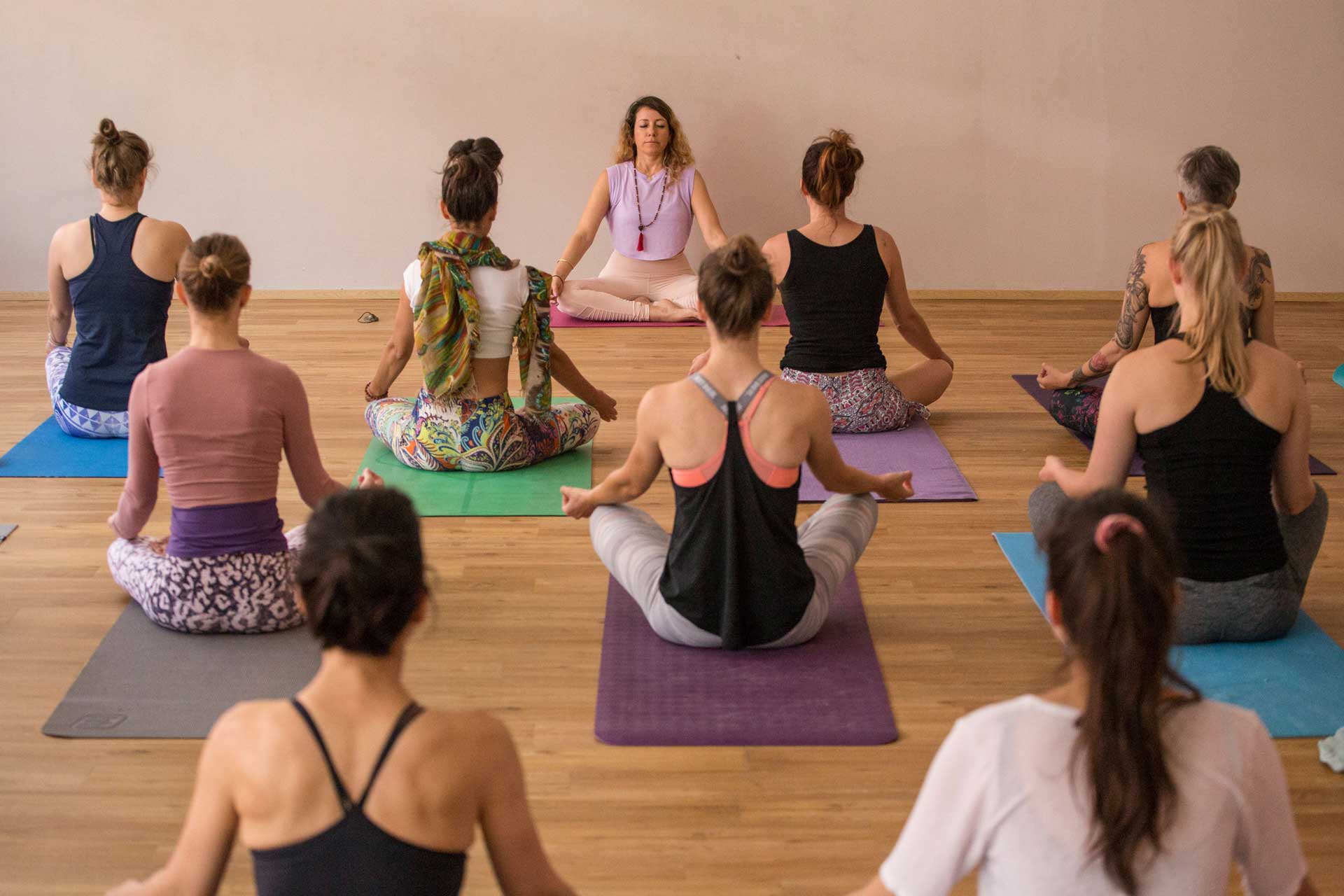 Don’t ever miss out a workshop with your favourite yoga teacher!

Sign up to get the latest info on workshops & blogs straight into your mailbox.

You can find out more about which cookies we are using or switch them off in SETTINGS. 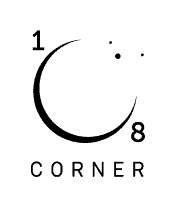 This website uses cookies so that we can provide you with the best user experience possible. Cookie information is stored in your browser and performs functions such as recognizing you when you return to our website and helping our team to understand which sections of the website you find most interesting and useful.

You can adjust all of your cookie settings by navigating the tabs on the left-hand side.

We use cookies to personalize content and ads, to provide social media features and to analyze our traffic. We also share information about your use of our site with our social media, advertising and analytics partners who may combine it with other information that you’ve provided to them or that they’ve collected from your use of their services. You consent to our cookies if you continue to use our website. Cookie information is stored in your browser and performs a recognition function each time you return to our site. This helps us to determine which parts of the site are most interesting and useful for you. If you would like to continue using our site, please agree to the use of Strictly Necessary Cookie. Thank you!

If you disable this cookie, we will not be able to save your preferences. This means that every time you visit this website you will need to enable or disable cookies again.

This website uses Google Analytics to collect anonymous information such as the number of visitors to the site and the most popular pages.

Please enable Strictly Necessary Cookies first so that we can save your preferences!